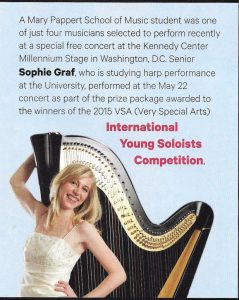 Sophie was featured in the biannual Duquesne University Magazine’s fall 2015 issue after winning the VSA International Young Soloists Competition. Below is the full text:

A Mary Pappert School of Music student was one of just four musicians selected to perform recently at a special free concert at the Kennedy Center Millennium Stage in Washington, D.C. Senior Sophie Graf, who is studying harp performance at the University, performed at the May 22 concert as part of the prize package awarded to the winners of the 2015 VSA (Very Special Arts) International Young Soloists Competition. 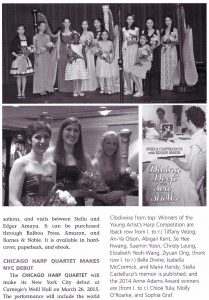 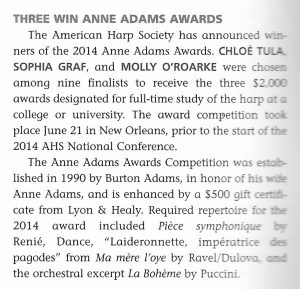 Sophie was featured in HarpColumn magazines’s September/October 2014 issue after winning the Anne Adams Awards. Below is the full text:

THREE WIN ANNE ADAMS AWARDS
The American Harp Society has announced winners of the 2014 Anne Adams Awards. CHLOE TULA, SOPHIA GRAF, and MOLLY O’ROARKE were chosen among nine finalists to receive the three $2,000 awards designated for full-time study of the harp at a college or university. The award competition took place June 21 in New Orleans, prior to the start of the 2014 AHS National Conference.
The Anne Adams Awards Competition was established in 1990 by Burton Adams, in honor of his wife Anne Adams, and is enhanced by a $500 gift certificate from Lyon and Healy. Required repertoire for the 2014 award included Piece symphonique by Renie, Dance, “Laidernonnette, imperatrice des pagodes” from Ma mere l’oye by Ravel/Dulova, and the orchestral excerpt La Boheme by Puccini. 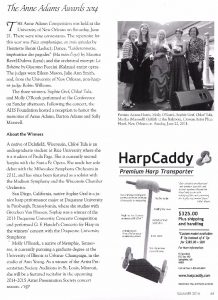 Sophie was featured in The American Harp Journal’s summer 2014 issue after winning the Anne Adams Awards. Below is the text related to Sophie:

The Anne Adams Awards 2014
The Anne Adams Competition was held at the University of New Orleans on Saturday, June 21. There were nine contestants. The repertoire for this year was Piece symphonique, en trois episodes by Henriette Renie (Leduc); Danse, “Laideronnette, imperatrice des pagodes” (Me mere l’oye) by Maurice Ravel/Dulova (Lyra); and the orchestral excerpt: La Boheme by Giacomo Puccini (Kalmus) entire opera. The judges were Eileen Mason, Julie Ann Smith, and, from the University of New Orleans, non-harpist judge Robin Williams.
The three winners, Sophie Graf, Chloe Tula, and Molly O’Roark performed at the Conference on Sunday afternoon. Following the concert, the AHS Foundation hosted a reception to honor the memories of Anne Adams, Burton Adams, and Sally Maxwell.
About the Winners
…………………………….
San Diego, California, native Sophie Graf is a junior harp performance major at Duquesne University in Pittsburgh, Pennsylvania, where she studies with Gretchen Van Hoesen. Sophie was a winner of the 2013 Duquesne University Concerto Competition and performed G. F. Handel’s Concerto for Harp in the winners’ concert with the Duquesne University Symphony.

Sophie was featured in the Pittsburgh Tribune-Review as a Newsmaker in 2014 after winning the winning the Anne Adams Awards. Below is the full text:

Noteworthy: The American Harp Society named Graf a 2014 Anne Adams Awards winner, which includes a $2,000 scholarship for full-time study of the harp. Graf was one of three winners selected through a competition hosted by the harp society and the American Harp Society Foundation.
Age: 20
Residence: San Diego resident who attends Duquesne University
Family: Parents, John and Jennifer Graf; four siblings, Thomas, 17, Cindy, 12, Anthony, 10, and Suzy, 4
Education: Junior majoring in harp performance in Duquesne’s Mary Pappert School of Music
Background: Graf has studied the harp for about eight years, before which she studied the piano for five years. She is the only harp student at Duquesne University, which she chose to attend partly because of the opportunity to study under harp professor Gretchen Van Hoesen, principal harpist of the Pittsburgh Symphony Orchestra. After she graduates from Duquesne, Graf plans to obtain a master’s degree in harp performance and then possibly become an orchestral harpist.
Quote: “It was a big nod of approval from the harp community,” she said of the Anne Adams Awards.

Please contact Sophie for a press package including a bio, resume, repertoire list, headshots, and any current press releases. You may also request additional information.